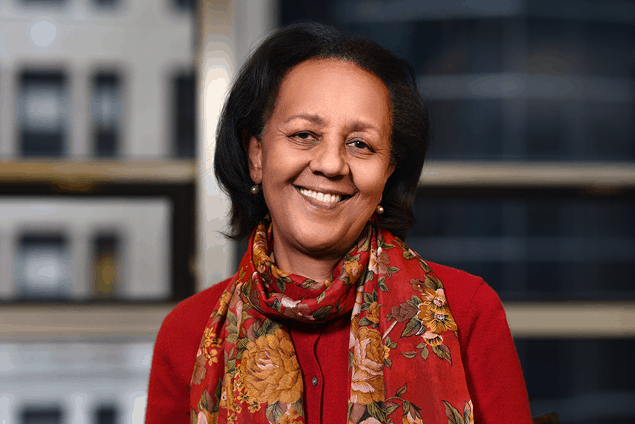 Below, read excerpts from our wonderful interview with Mariam. Or, you can watch the video now!

Mariam: In Ethiopia, I was a high school student, so it was just very structured days, and so on. I went to a French lycée in Ethiopia. [It was automatic that] the Ethiopian citizens who passed the French bac (high school exam), we had a scholarship to go to study in France. All you had to do was pass the exam, which I did. So, at the end of my senior year of high school, I was given a scholarship to go study in France [and] that’s how I left Ethiopia.

There was a program that talked about things that you can do in the United States. At the end of it, the speaker suggested us to write to their address if we wanted to know anything about the United States. This would have been in the early 1970s.

I looked through and I wrote to some programs: “I’m a student. I’m from Ethiopia, I’m studying in France. I would like to improve my English during the summer in your programs.”

I got letters back from a bunch of schools, one of which was the University of Buffalo. I went for a summer and I liked it, so I decided that when I was done with whatever I was doing in France, I would come [to the U.S.] for further studies.

Mariam: Finding a job in New York […] was a bit of a challenge. But luckily, I found a job working at a university, because I had been working throughout my career at Buffalo. I had worked with international students. I was a resident advisor and so on, so that gave me a leg up.

My degree is in teaching English as a second language, so I got a part-time job teaching English. Then I got a full-time job as an international student advisor, so I sort of slipped into that career rather easily.

Mariam: There were no student services in the French university system [when I studied there]. You were supposed to take to take care of yourself. When I came to the United States, I was amazed at how many people were there just to help students: advising, counselors, all manners of people. They met me at the airport, they took me to the dorm, they helped me open a bank account. I mean there were people to help you do everything here. In this respect, it was very, very different.

At the same time, the university was much bigger, there were many more students. And, of course, I went to school in Buffalo, and then winter happened. I saw my first snow and things like that. From the South of France to Buffalo, New York, it’s quite a change in terms of climate.

[Another] thing that was difficult about New York was the subway, which is something I had never, ever been on. If you recall in the 1970s, in 1978, New York’s subway was not in the best of shape, so commuting took a very long time. I used to live in Flushing, Queens, [but] I worked in Brooklyn. So, I had to have a very long commute both ways on subways that broke down very frequently. I remember that very, very much. That was the one challenge, actually. It was the commute.

Mariam: Everybody comes with a different experience and a different background, and one of the things that worked for me, at least, was the fact that to just keep trying, move forward, and the status of being an immigrant is neither a plus nor a minus. It’s just what it is. You are somebody who was born somewhere else, and who came here either by choice or not by choice, but you’re here now. It doesn’t buy you any privileges, but it does present some challenges in the sense that you might have linguistic problems or you might have issues with re-orienting yourself or cultural issues—but those can be dealt with one at a time and just chip away at them a little bit.

It’s something that a lot of people have dealt with, and a lot of people have successfully transitioned here. There’s more success than failure in that respect, to be honest, depending on, of course, other personal circumstances. But for most people who just come here: Just keep pushing, just jump in it, and do what you need to do.

Learn more of Mariam’s story by watching the video here. For more stories, as well as immigration news and advice, subscribe to the WES Advisor Newsletter.