What to Know about Canada’s 2017 Immigration Plan

On October 31, 2016, the government of Canada released its immigration plan for 2017, and the news was positive for anybody hoping to immigrate to Canada through one of the many economic or family sponsorship programs. In short, Canada will be accepting a greater number of these newcomers through 2017 and beyond.

Although many may feel that Minister John McCallum’s department of Immigration, Refugees, and Citizenship Canada (IRCC, formerly CIC) could have increased the overall target number significantly beyond the 300,000 mark for the coming year, the minister was quick to note that this is the government’s new “baseline” target, and that more increases can be expected over time.

So, how does a government increase the target figure for the economic and family sponsorship programs without significantly increasing the overall figure? Simply put, the 2016 plan included more than 30,000 additional refugee arrivals than usual. Next year, the number of refugees coming to Canada will be slightly lower than in 2016. That being said, the government still aims to take in more refugees in 2017 than in any annual cycle during the previous government, and for this, they should be commended.

Economic Immigration: The Outlook for 2017

Unless you have a potential family sponsor in Canada, such as a spouse, common-law partner, parent, son, or daughter—and unless you are seeking refuge—your route to Canadian permanent residence will be through an economic program. For 2017, around 58 percent of all new immigrants to Canada will come through one of these economic programs.

Let us first look at the three federal economic immigration programs, namely the Federal Skilled Worker Class, the Federal Skilled Trades Class, and the Canadian Experience Class. I have put these three programs together because, since January, 2015, they have all been managed through the Express Entry immigration selection system. Together, up to 75,300 new immigrants will land in Canada through one of these programs in 2017 (last year it was 59,000).

Of all the changes that have been made to the economic program targets for 2017, arguably the most significant is the increased role that Express Entry is expected to play. The 2017 targets include applicants who applied prior to the launch of Express Entry and whose applications remain in the inventory of applications that have not yet been processed to completion. And yet, this inventory is constantly becoming smaller. Accordingly, the number of people to be invited to apply for Canadian permanent residence through Express Entry in 2017 is expected to go up considerably.

It appears that we have already been witnessing the foundations of this positive development over recent weeks and months, as there has been a substantial increase in the number of Invitations to Apply issued over the most recent draws—the November 2 draw was nearly three times larger than draws that took place over the summer months. The consequence of larger draws is that the Comprehensive Ranking System (CRS) threshold has been going down (to learn more about the CRS and how you may increase your score, please read this article I previously wrote for WES Advisor.)

One of the most remarkable developments in economic immigration to Canada over recent years has been the role the provinces play through the Provincial Nominee Programs (PNPs). These programs—which allow provinces and territories to nominate individuals who want to immigrate to Canada and who are interested in settling in a particular province or territory—will be the route for around 51,000 people to become permanent residents next year. It should also be noted that arrivals to Quebec are counted in addition to, rather than as part of, this figure.

Currently, the provinces and territories present a range of PNP categories, some of which target people in specific occupations, some of which do not. Moreover, some PNPs have unique points systems, or distinct application guidelines, or changing criteria. Some PNP categories operate on a first-come, first-served basis, whereas other categories favour an Expression of Interest/Invitation to Apply model.

In short, don’t underestimate the variety and diversity of the PNPs. A PNP could be your ticket to Canada; therefore, it is crucial to stay abreast of all the developments.

For its part, the province of Quebec will also be busy on the immigration front in 2017. This unique province, which has a separate immigration agreement with the government of Canada, welcomes skilled workers, investors, and entrepreneurs, as well as individuals with experience working or studying in the province. The government of Quebec is keen to move the province’s immigration system toward an Expression of Interest/Invitation to Apply model, which may lead to more opportunities for skilled workers around the world to move to this amazing, idiosyncratic province that I have been lucky to call my home for almost my whole life.

Recently, the government of Quebec doubled down on a plan to maintain annual immigration levels above 50,000 for the coming year, despite political opposition. With a target of up to 31,200 to come through Quebec’s economic programs, the province will maintain its vital role in the Canadian immigration scene.

Apart from the aforementioned programs, Canada will also launch a federal-provincial initiative with the Atlantic Provinces, with a modest goal of 2,000 new arrivals for the coming year. In addition, there will be business immigration opportunities at the federal level, as well as through Quebec and the other provinces. Lastly, around 18,000 caregivers in Canada will transition to permanent resident status. 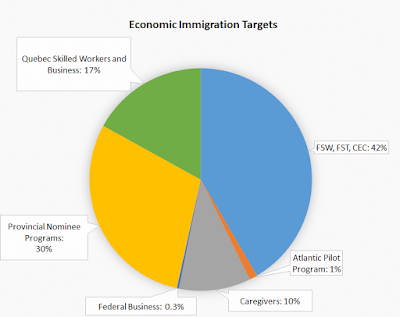 Keeping It in the Family

More Canadian citizens and permanent residents will be able to sponsor their loved ones for immigration next year. The government has set a target of 20,000 parents and grandparents to immigrate, with a further 64,000 spouses, common-law partners, and children to join them.

Moreover, the government plans on repealing the conditional permanent residence regulatory provisions for certain sponsored spouses and common-law partners. If approved, the change is expected to come into force early in 2017. The government has also made strong headway on reducing processing times through the family sponsorship programs, with the latest figures showing an overall reduction in processing times of 15 percent over the past year.

There is something exciting going on here in Canada. We have an outward-looking and welcoming government that bucks the global trend. We have infrastructure projects going on from coast to coast to coast. We have growing cities and growing markets. Throughout all of this, we need talent.

In 2017, a brand new permanent resident will join the wider Canadian family on average every 1 minute and 45 seconds. As we can see, there are many programs, each of which seeks to attract certain newcomers. It’s like that ancient idiom “all roads lead to Rome,” only this time all roads lead to Canada. There is a common starting point, however, and that point is to assess all of your options and move forward accordingly.